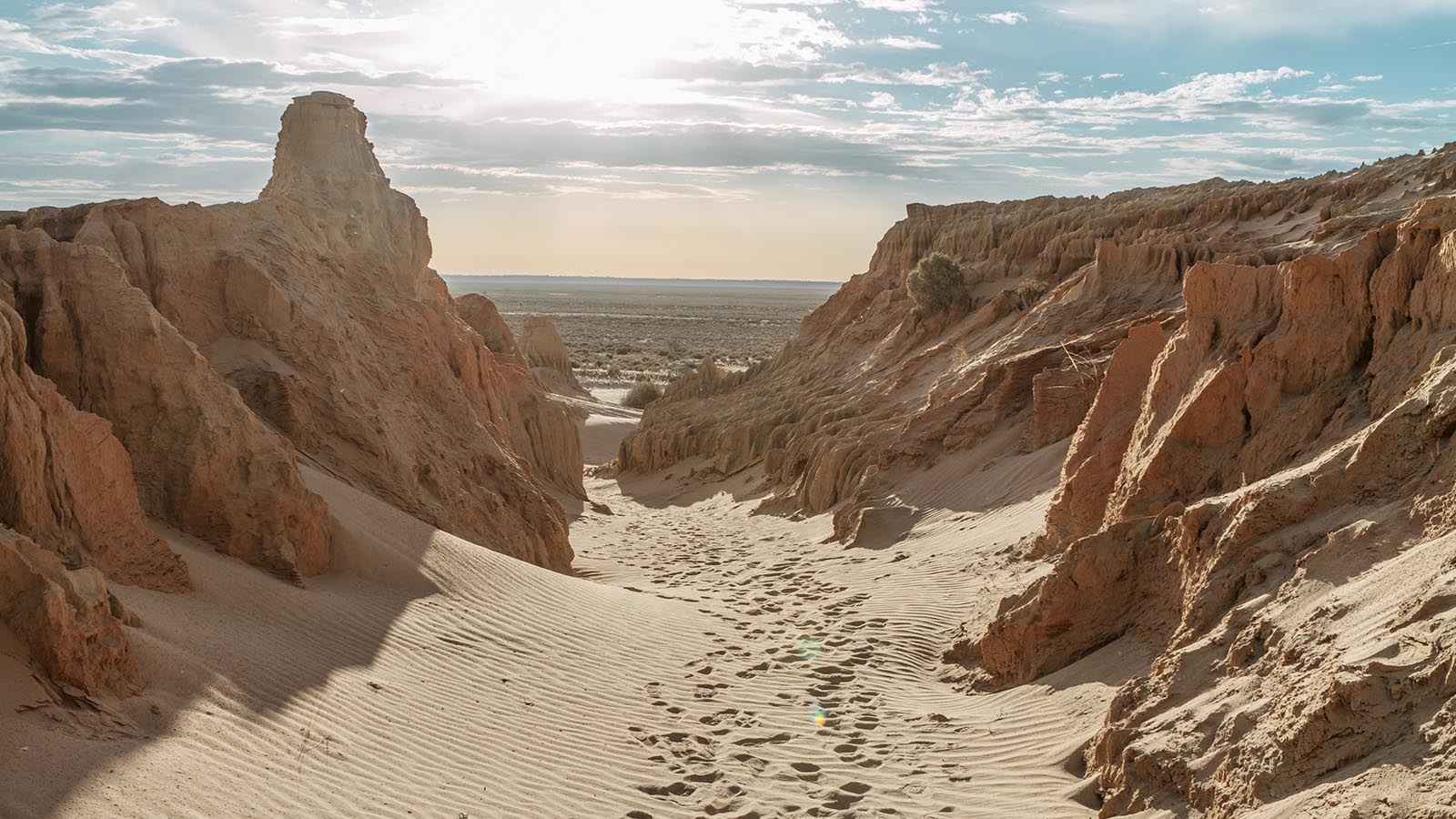 Remains of the earliest known humans to inhabit the Australian continent have been found in Mungo National Park, dating back to nearly 40,000 years ago.

Until 15,000 years ago the region was often a vast lake, its waters rising and ebbing according to climatic change, making Mungo a preferred habitat for a dazzling diversity of wildlife. Giant kangaroos, wombats and other mega fauna as well as Tasmanian tigers and devils roamed the land. A treasure trove of fossils is a legacy of this extraordinary heritage.

The abundance of the lake also made Mungo an ideal location for Aboriginal settlement. Tribes camped and fished along the shores, hunted for food and quarried stone from rock outcrops on the lake floor. Mungo is thus the site of one of earth's longest continuous human habitations.

Fifteen thousand years ago the lake dried up. Over centuries winds swept storms of sand up from the lake floor, dumping it on the shoreline and creating the famous Mungo lunette. This is the site of the spectacular Great Walls of China, which have been carved from layers of the lunette. As the lunette erodes it reveals remains and fossils.

The park's red, sandy country is home to an array of animals, birds and plant life, including wedge-tailed eagles and red kangaroos. All are there to be seen when you wander the carefully plotted pathways within the park.

In the 1850s squatters moved into the area and established Gol Gol station. Make sure you explore the Mungo Woolshed near the Visitor Information Centre. This beautiful structure was built around 1869 from local cypress pine and is an important part of the region's pastoral history.

Accommodation
The best time for visiting is between March and October. There is a camping ground and shearers quarters which can cater for up to 24 people. Bookings for these can be made via nationalparks.nsw.gov.au Quality accommodation is also available at Mungo Lodge. The lodge offers motel style cabins and has a licensed dining room open seven days.

Visitor Centre
The centre is located off Arumpo Road. Open every day, the centre contains information and artefacts covering the park's natural and cultural heritage. On display are examples of the preserved ancient animal remains found at Mungo as well as weapons and other implements of the Aboriginal peoples who lived here. The history of European settlement is also covered.