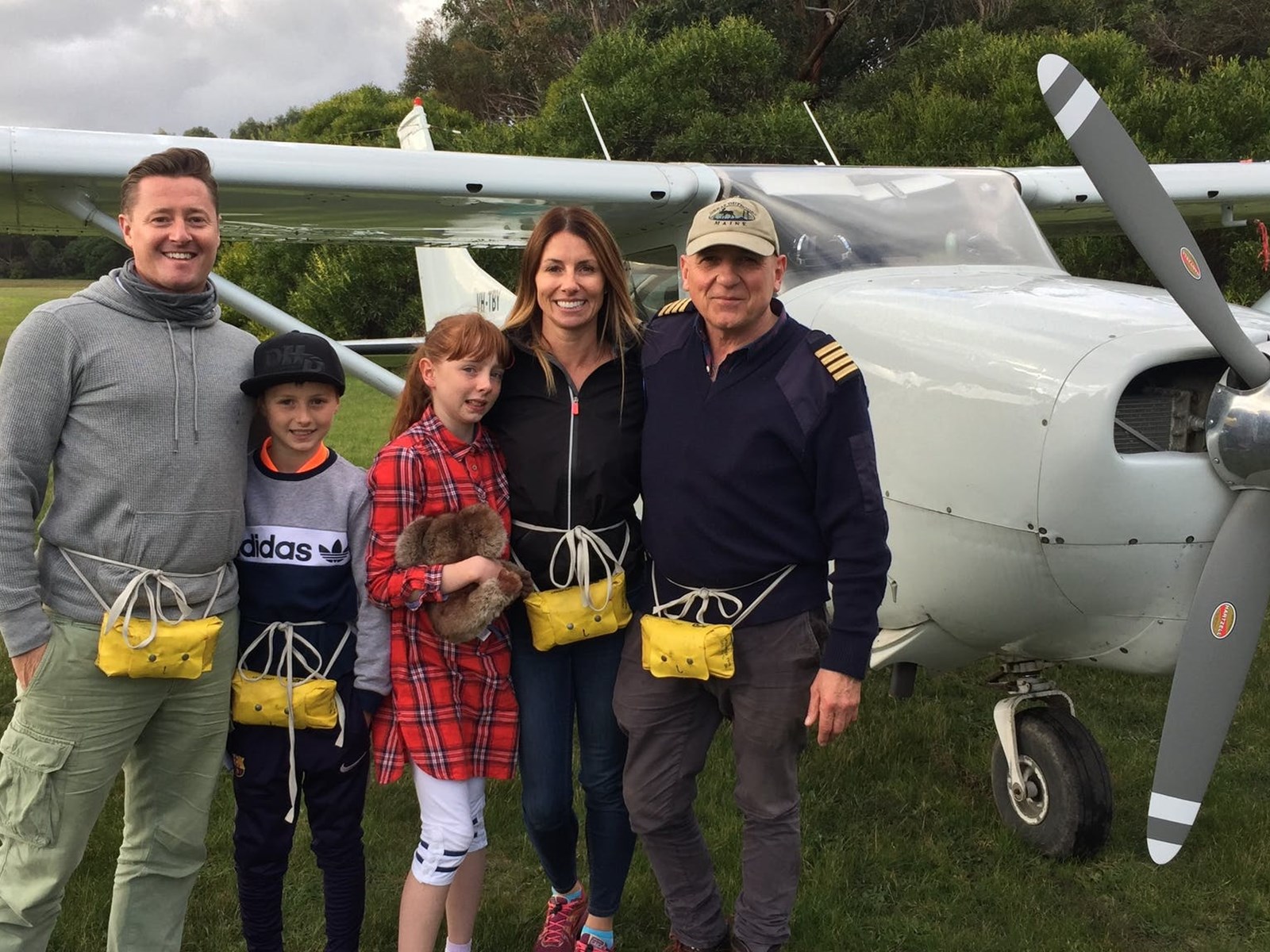 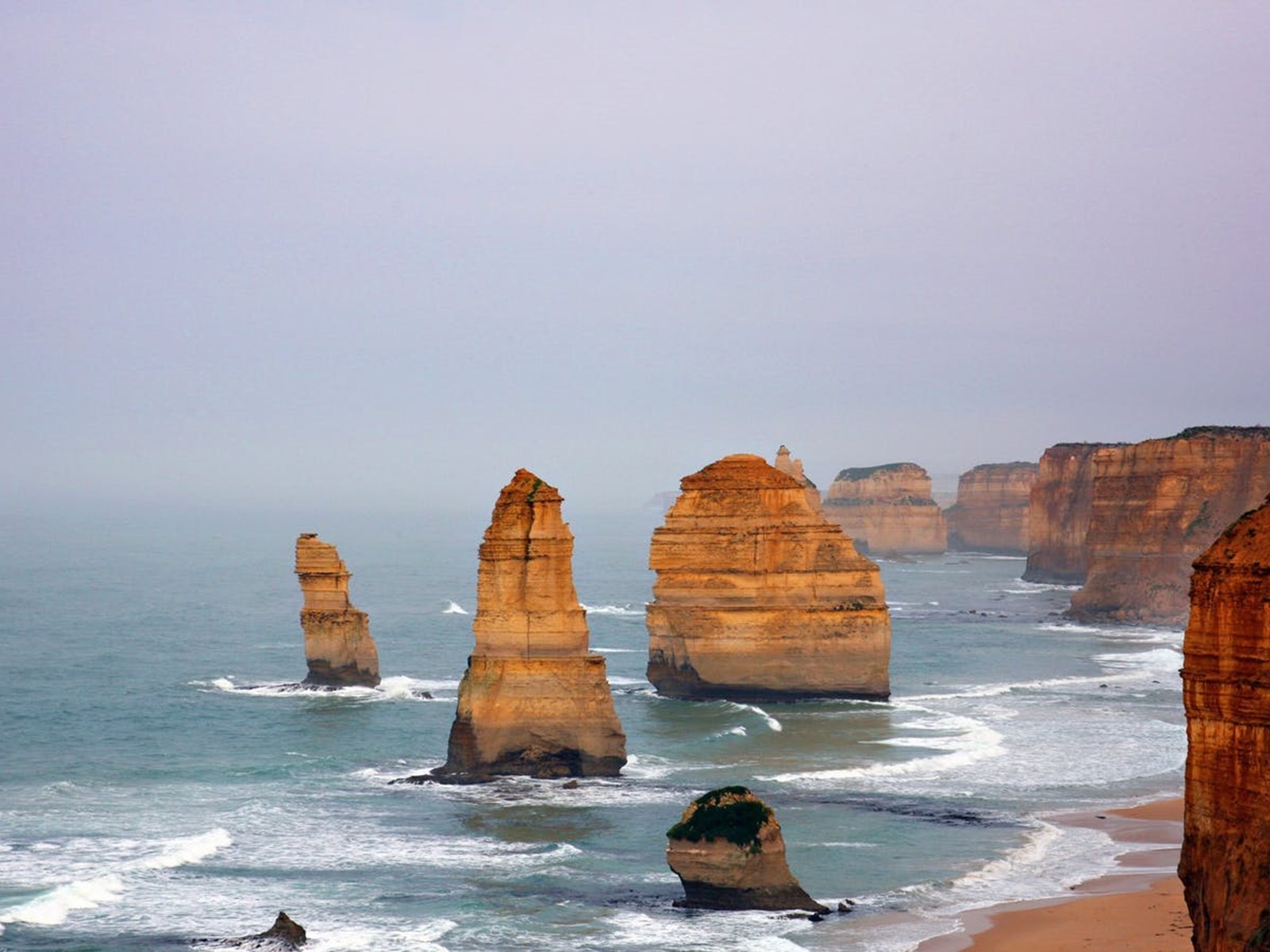 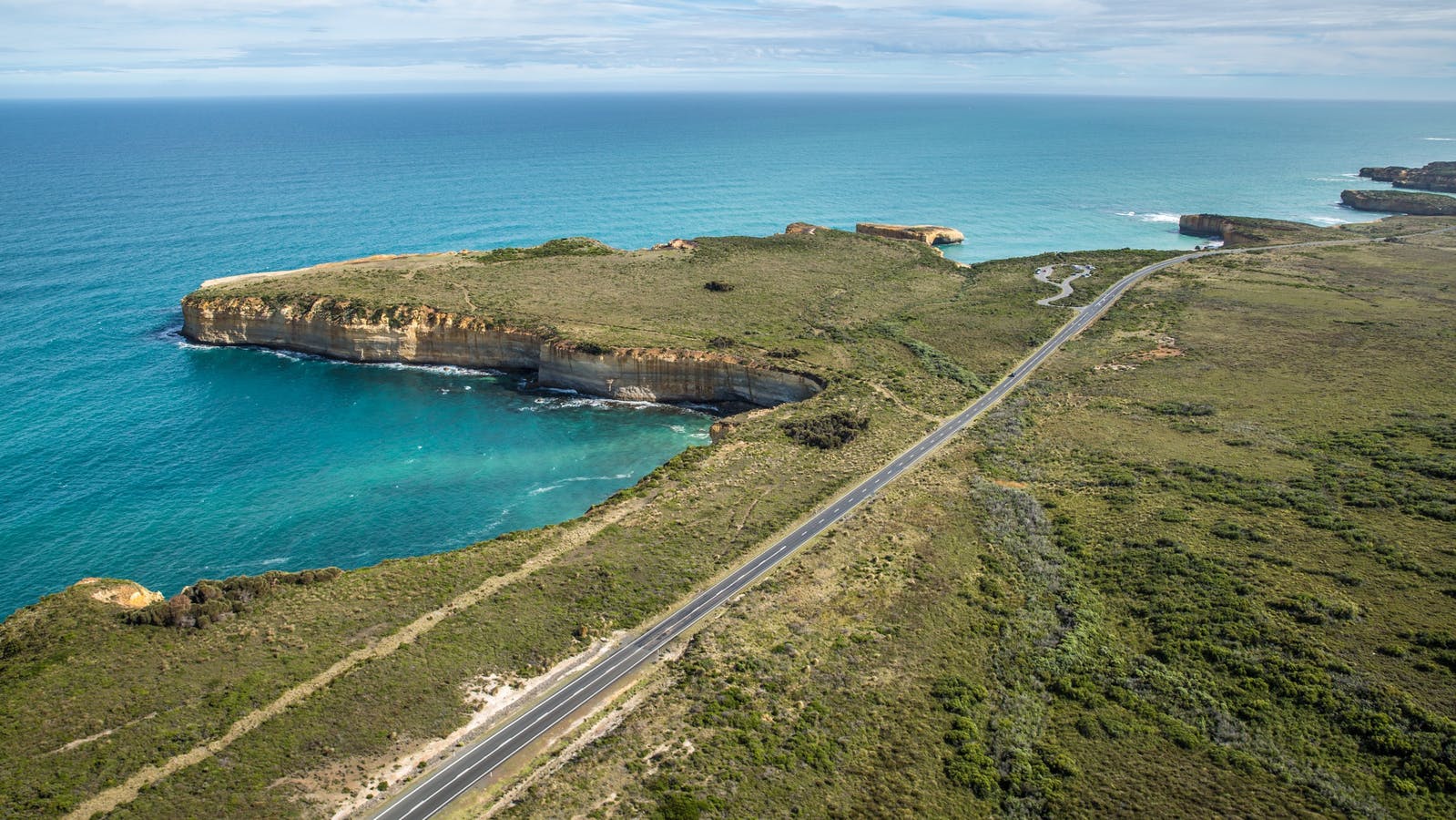 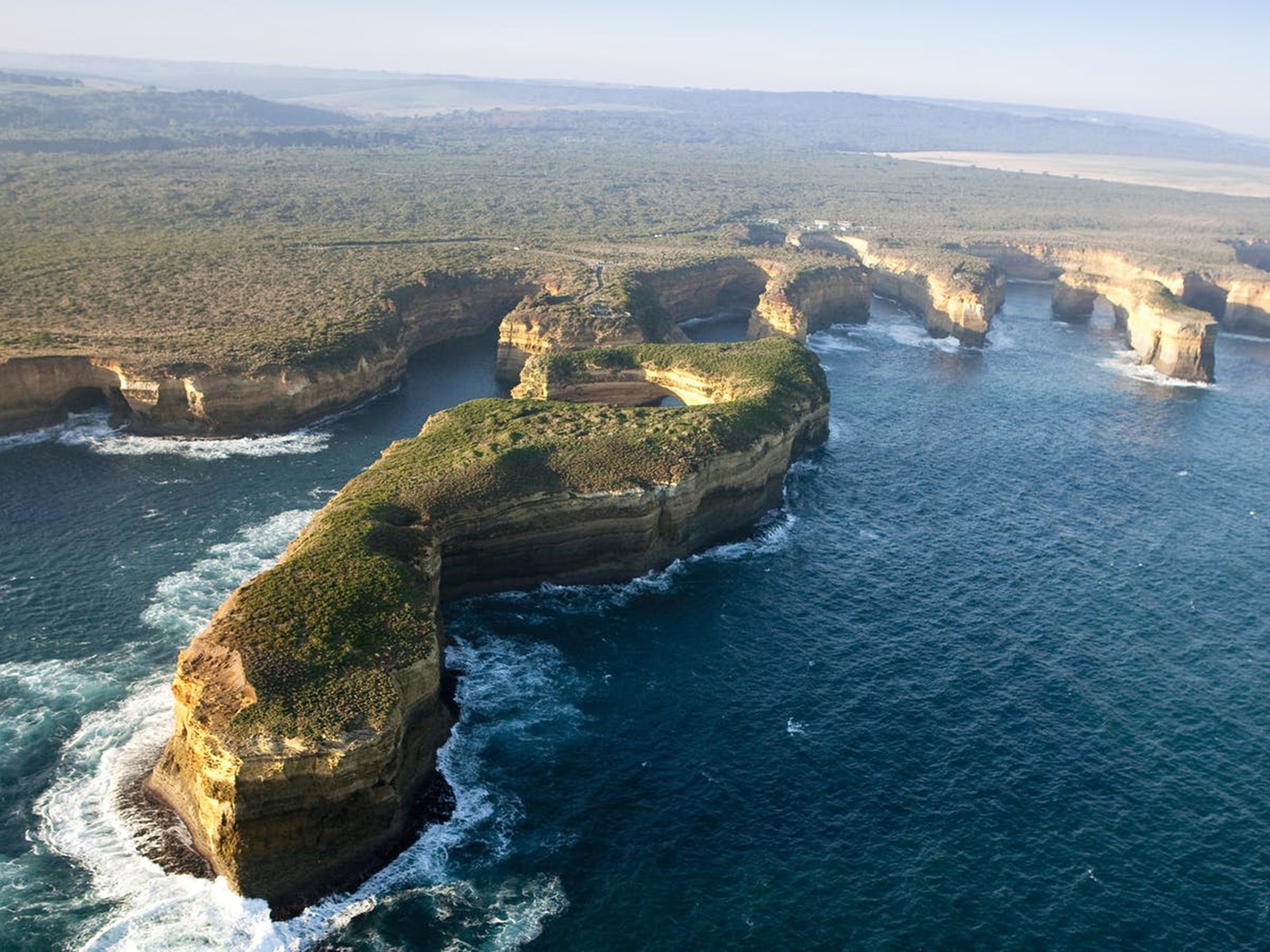 After a relaxing one-and-a-half hour drive from Melbourne, gain an insight into Australian surfing culture at Bells Beach. Visit the historic Split Point Lighthouse in Aireys Inlet, which is credited with saving hundreds of ships and thousands of lives along Australia’s treacherous shipwreck coast.

Soak up the atmosphere of Victoria’s premier holiday town, Lorne before marveling at the cliff-hugging road that stretches between Lorne and Apollo Bay. It is one of the most spectacular roads in the world, home to monstrous cliffs, roaring seas, tranquil coves, and secluded beaches. En route, visit the wild koalas of Kennett River and get acquainted with some of Australia’s most colourful birds. Sample award-winning food and wines and panoramic views in a carefully selected restaurants in Apollo Bay.

Next it is time to climb aboard your light aircraft and take one of the world’s truly great scenic flights. For the rest of the road you will be flying high. Enjoy breathtaking aerial views of the Twelve Apostles, Moonlight Head, The Cape Otway Light station, Gibson’s Steps and Loch Ard Gorge before a gentle touch down back in Apollo Bay. Travel through the majestic Otway Ranges on your way back to Melbourne.

A 45 minute scenic flight aboard a fixed wing aircraft, morning tea, a two-course lunch with a beverage (beer, wine or soft-drink), a local guide providing expert commentary and a luxurious private vehicle with complimentary water.

They offer a range of carefully crafted itineraries and also provide guests with the opportunity to fully customise their experience to suit their individual needs. Tours are suitable for individuals, families and groups. Extended adventures and incentive group touring are also available in all regions of Victoria.

The Melbourne Private Tours team work closely with their vast network of personal contacts in Melbourne and Victoria to provide guests with immersive and innovative experiences that deliver memorable ‘behind the scenes’ experiences often not available to the general public. You will meet the locals; the artists, farmers, and wine makers; the artisan producers and the people who make Melbourne and Victoria such a fascinating destination.

Tours
Melbourne City Sights
With its Victorian architecture, stunning gardens and edgy bar, culinary, fashion and live music scenes, Melbourne is an obvious start to any visit to...
Tours
Grampians Two Day Adventure
The Grampians is home to some of Victoria’s most stunning landscapes, along with fascinating history, sublime food and wine and buzzing regional centres...
Tours
Private Dandenong Ranges Tour
Just an hour’s drive from the city is the verdant landscape of the magnificent Dandenong Ranges, part of the Great Dividing mountain range which runs the...
Tours
Private Phillip Island Penguin Parade
A trip to Phillip Island is a must for nature lovers and those seeking a unique Australian experience. The island is home to a collection of Australian...
Tours
Private Mornington Peninsula Tour
The Mornington Peninsula has been captivating visitors for more than 100 years. Attracted by the gentle hills, kilometres of sparkling bay beaches, rugged...
Tours
Private Great Ocean Road Tour
Victoria’s Great Ocean Road is an amazing experience at any time of the year. One of the most beautiful coastal roads in the world, the Great Ocean Road...
Tours
Private Ballarat and Sovereign Hill Tour
Step back in time and immerse yourself in the excitement of Ballarat’s gold rush days at Sovereign Hill! Set on a former gold mining site, this award winning...
Tours
Private Daylesford Tour
Enjoy a scenic drive from Melbourne to the Victorian spa country to embark on a day of galleries, fresh produce, lush farmland and stone farmhouse buildings...
Tours
Private Majestic High Country Tour
The mystery and majesty of the Victorian High Country has attracted locals to the area for generations; it is now caught the gaze of visitors from further...
Tours
Melbourne After Dark
Is there a more seductive city than Melbourne after dark? See the city come alive at night. Marvel at the heritage buildings throughout the Golden Mile...
Tours
Understanding the Real Melbourne Tour
Truly a city like no other, Melbourne boasts an eclectic mix of cultures and history. For Melburnians today, life revolves around food, fashion, the arts...
Tours
The Essential Melbourne Expereince
Get Inside and Outside to really experience Melbourne like a local. Start your day with a fun, relaxing bike ride in the great outdoors. Get your bearings...
Tours
Private Yarra Valley Tour
As one of Australia’s leading wine making regions, just a short drive from Melbourne, the Yarra Valley is an ideal destination for a day trip. With a picturesque...
Tours
Taste the Queen Victoria Market
A perfect highlights tour for couples or small groups looking to get a taste of the world-renowned Melbourne food scene. This four hour walking, talking...
Tours
Food, Art and Laneways Walk
Melbourne is a city renowned for great art and delicious food. People travel from far and wide to visit international exhibitions, laneway street art and...
Tours
Phillip Island Ranger Led Adventure
The ultimate way to experience the beauty and nature of Phillip Island. Spend the afternoon with exclusive access to one of the islands Nature Parks Rangers...
Tours
The Ultimate Great Ocean Road: Drive and Helicopter Tour
One of the most beautiful coastal roads in the world, the Great Ocean Road stretches 243 kilometre along the southern coast of Victoria. Travel it and...
Tours
A Foodies Journey through the Mornington Peninsula
Prepare to be inspired and delighted by this diverse, boot-shaped region. Your hosts own 27 acres of charming farm land that allows them to produce premium...
Tours
Yarra Valley – Ballooning and Barrel Tasting
What a way to start your day - floating gently over the Yarra Valley. Let the breeze usher you along the corridors of grape vines and over The Yarra River...
Tours
Melbourne: The Fashion Capital
Located just 20 minutes from Melbourne’s CBD is the high-end suburb of Armadale: a classic Melbourne neighbourhood with a mixture of modern and heritage...
Tours
Jewish Melbourne
Discover the thriving culture of the Jewish diaspora in cosmopolitan Melbourne and encounter the influences the community has made on the city. Hosted...
Tours
Two Day Great Ocean Road Tour
Day One: Victoria’s Great Ocean Road is an amazing experience at any time of the year. The Great Ocean Road stretches 243 km along the southern coast of...
Tours
The Ultimate Melbourne Food Tour
What better way to experience Melbourne than with an edible tour through the city’s most fascinating precincts. Melbourne Private Tour's culinary guides...