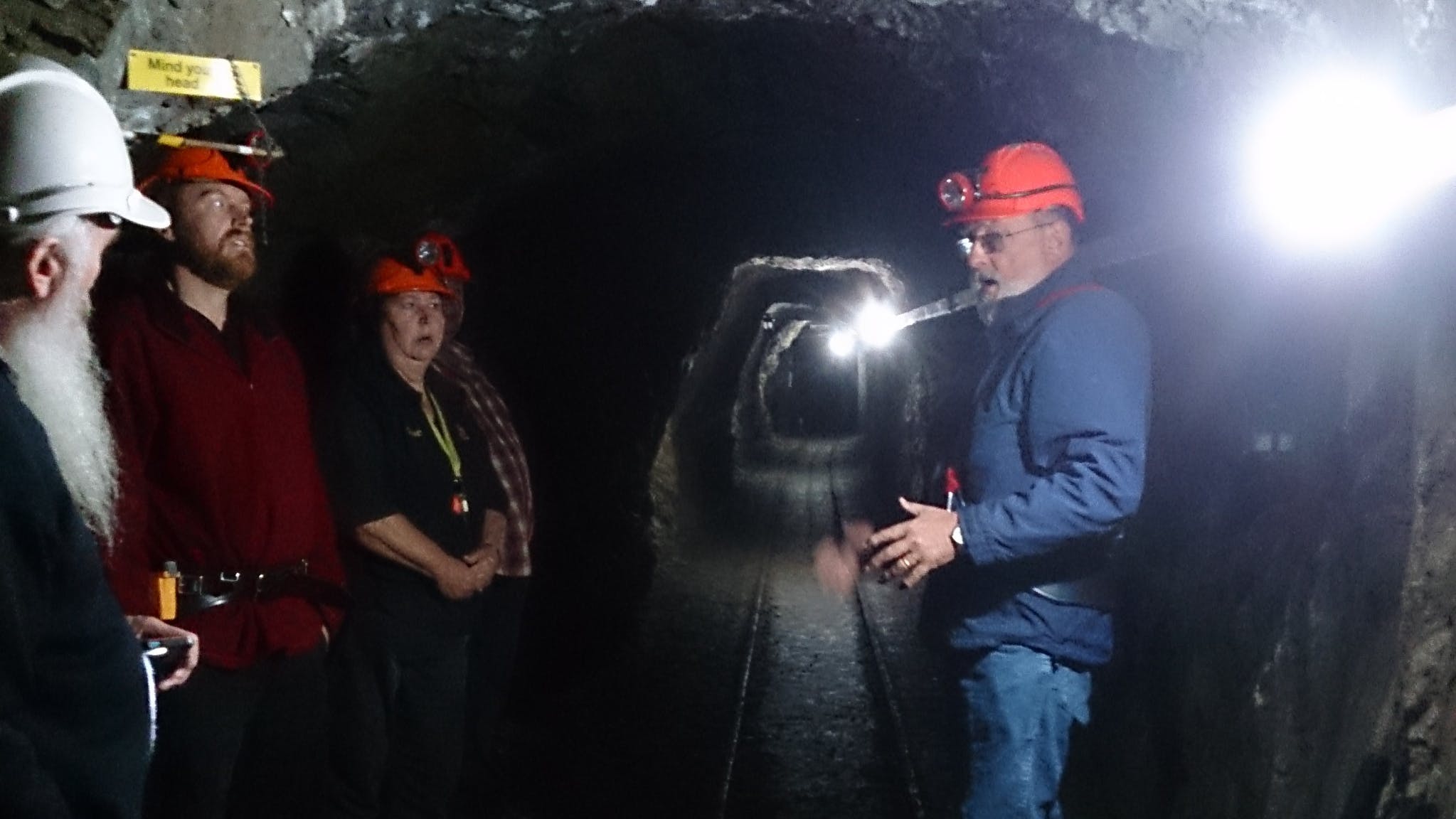 Mine Manager Geoff Anderson and a group of people standing in an underground tunnel on a tour.
Call
Website
Email

Mine Manager Geoff Anderson and a group of people standing in an underground tunnel on a tour.

The Mine Manager, Geoff Anderson, conducts technical tours of the Mine by arrangement. Geoff is an experienced Mining Engineer, having worked first as a miner in the deep gold mines of Kalgoorlie and in the tin mines on the west coast of Tasmania – and later as an engineer in most countries of South-east Asia.

The tour lasts a little under two hours, with the group size limited to 10.

Overhand backfilled stope mining methods used in deep quartz reef mines will be explained, with discussion on how these methods have developed into the 21st Century. The group will also learn how the mine was ventilated, kept dry, and lit. Haulage methods in the Long Tunnel Extended Mine, and its neighbour the Long Tunnel Mine, were unique and arrangements for vertical and horizontal haulage will be explained.

After the tour, the group will enjoy tea or coffee while viewing plans of the Mine’s 8½km of underground workings.

The tour costs $50 per person. Must be pre-booked.

Bookings by or telephone.

Students and academic staff of recognised engineering faculties will be charged $25 each with one staff member admitted free of charge with every nine students.

Experienced Mining Engineer Geoff Anderson explains overhand backfilled stope mining methods, with discussion on how these have developed into the 21st Century. The group also learns how the mine was ventilated, kept dry and lit, and the unique arrangements for vertical and horizontal haulage.

Explore deep underground with a guided tour of the Walhalla Long Tunnel Extended Gold Mine. Find out what life was like for the miners, and discover how this became one of the worlds' richest gold mines.

The tour takes visitors 150 metres below the surface and 300 metres into the hillside to the huge underground machinery chamber hewn from solid rock over a century ago. Old mining methods are discussed and a large outcrop of the famous Cohens Line of Reef can be seen from inside the mine.

Located at the north end of the living historic gold mining town of Walhalla, the mine commenced operation in 1865. Over the Mine's 50 year history it produced 440,312 troy ounces of gold or 13,695 kilograms. It was the top producing gold mine for six of those 50 years. During that time the population was over 4,800 people, but there are now less than 20 permanent residents living in Walhalla.

The tour takes 45-50 minutes and is wheelchair and stroller friendly, plus there is a free museum and blacksmiths shed. Toilets are available.

Mine Manager Geoff Anderson and a group of people standing in an underground tunnel on a tour.